How Can You Remove the Dent Without Using Filler?

Home > How Can You Remove the Dent Without Using Filler? 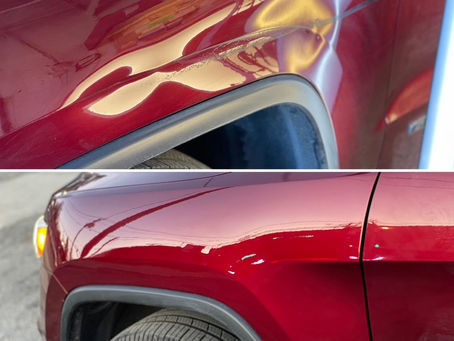 How Can You Remove the Dent Without Using Filler?

Someone in the parking hit your car’s back, and it gets a big bump. Freaking out in such a situation is normal as you could be in trouble with a big dent in the car. Firstly, it would be difficult to see the dent in your beloved car. Secondly, the high repair cost can burn a hole in your pocket. What to do in such a situation? Will you take your car to a traditional dent repair shop? Let’s see what they will do.

A traditional dent repair expert will apply filler on the dent and repaint it. Body filler can restore its original condition, but there is a risk. If the person applies a thick layer of fillers, it can crack after a few months, leaving your car with a daunted look. If you want to get rid of dents permanently, look for the best dent removal shop in Queens that can provide paintless dent repair. This technique doesn’t require body fillers and painting, and it can restore the dented area with specialized tools. Read on to know more about the paintless dent removal method

Can the paintless dent technique remove every dent type?

Sometimes the dent is visible, but its location often makes the task challenging. However, the paintless dent removal technique can remove every dent type, whether accessible or not.

The dent located at accessible areas such as roof, bonnet, and the metal part near brim is easy to deal with. The secret of paintless dent repair is using a metal rod to hit the dented area from behind so that the surface becomes smooth again. Experts follow a specific technique to bring back the smooth surface.

Sometimes the dent is located in the area where the back of the dent is not accessible such as the car side panel and door. In such a situation, the experts rely on pulling sticks to remove the dent. Many professionals use such a high-quality paintless dent repair method in Nassau. Steve’s Paintless Dent Repair has more methods and professionals who efficiently perform paintless dent removal tasks. You can count on us to remove every type of dent, small or big; we will fix it.

Steve’s Paintless Dent Repair offers a better alternative to the traditional dent repair method. With over 15 years of experience, we have gained the proficiency to provide the high-quality paintless dent repair service in Nassau.